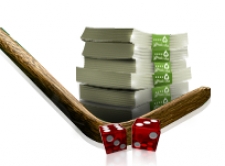 Craps is one of the most exciting games to play in a casino – the screaming, the team betting, and the act of throwing something while gambling all adds up to leave players breathless. Although playing craps in an online casino is obviously quite different, it is still a heck of a lot of fun to see the dice rolling on the felt, not to mention receiving that familiar sting of crapping out with snake eyes.

When looking for a Mac compatible online casino that offers craps, the first thing to do is check which casino software they are using so you can ensure that it was developed by a reputable company that has good standing in the industry. After verifying their software, the choice will come down to personal preferences such as their bonuses, game selection, or customer service.

The following is a list of the most popular craps games that you will find in land-based, or online casinos. Although there is one main version of craps that most players are familiar with, there are still variants of the game available, all of which have different rules. However, if you have a firm grasp of the craps game that is played in gambling meccas like Las Vegas, you will easily be able to understand the different versions that are offered in most online casinos.

Bank Craps is a version of the traditional game, sometimes referred to as “Las Vegas Craps”, because it is found in many Nevada gambling establishments. With many people around the world choosing to play in online casinos, the game has seen a huge surge in popularity. This is due to the fact that in Bank Craps players can only wager against the house, and not against other players, (as the ability to seat multiple players at a craps table would require very sophisticated casino software). One of the other main differences with Bank Craps is that the table layout is not the same, and the dice are thrown over a string or wire that is placed just above the surface of the craps table. Most people around the world play bank craps without the string, and refer to the game simply as “craps”.

High Point Craps is a casino game that is very close to the standard version of craps, with the main difference being that an initial roll of 2 or 3 is ignored and if a player gets a snake eyes they get to roll again. In addition, if the player rolls an 11 or 12 they automatically win.

Casino players across the world have many different names for Die Rich Craps such as Open Craps, Fading Craps, or the single die game called Money Craps. These versions of craps are considered by many experts to be illegal, and they are usually played in private clubs with high rollers as they involve specific wagers against the house, with the house keeping anywhere from 5 to 7% of the bet amount. It goes without saying that this version of craps will be almost impossible for the average player to find.

There is a very good reason that Crapless Craps is also referred to by many as “Bastard Craps”. This reason being that the shooter has a much larger disadvantage in regards to odds, conceeding an absolutely terrifying 5.38% house edge. The other main difference between regular craps and Crapless Craps is that players can choose to wager on rolling a 12, 11, 3, or 2 before they have thrown a 7, hence making it “crapless”.

This version of craps received its name due to the geographical area in which is is most commonly played: New York and many other areas of the eastern coast of the United States. Some consider the game’s name to be misleading as many gambling experts agree that New York Craps originated in the United Kingdom, Yugoslavia and the Bahamas. This version of craps has one of the highest house edges compared to the others, and is immediately recognizable due to its table layout which is referred to as a “double-end-dealer table”. The main difference between regular craps and New York Craps is in regards to the types of bets that are allowed; for example, players are not permitted to bet on “Come” or “Don’t Come”, as well as a few other standard craps bets.