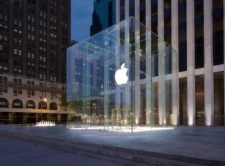 In 2006 Apple unveiled a new flagship store in New York City that really lived up to the motto of the time: Think Different. The 32 foot tall cube made from glass sits in one of the most prominent districts of one of the most famous cities of the world. Near Central Park and the iconic buildings of The Plaza, Trump Tower, and The Paris Theater, and amid shopping meccas such as Louis Vuitton, Chanel, and Prada, the 5th Avenue Apple Store in NYC is among elite company.

History of the 5th Ave. Store

Not only are the surroundings other A-list companies, but the building itself is unforgettable. The glass cube vestibule is street level, but it only gives a hint at what customers will find as they descend through a tubular elevator or spiral staircase into the actual store below.

Real estate in New York is not easy to find, or easy to fund. However, in 2003, Harry Macklowe had just purchased the GM building for $1.4 billion, but he had a problem on his hands. Architects and businessmen considered the front area of the GM building to be the “problematic plaza” for it seemed like a useless space. And underneath this useless space was a useless basement area that the GM building did not necessarily need. Through negotiations and collaborative efforts, Macklowe met with Steve Jobs and together they envisioned what eventually would become the Apple Store on 5thAvenue.

When it first hit the rumor mill that this glass structure would sit atop the underground store as a unique entry-way of sorts, there were critics that said it was too much contrast for the historic buildings that surround the area. They envisioned a modern glass box that would have no real architectural appeal. However, once unveiled, most of those critics quieted as the simple lines of the cube just seemed to reflect the surrounding beauty. There are 538 sheets of glass connected with more than 400 metal bolts, making this a shimmering landmark amid the older brick buildings.

The public space around the above ground cube was also designed by Apple, completing the ambience with fountains, areas for pedestrians to sit and relax on marble seating, and even a range of free Wi-Fi thanks to Apple. Macklowe’s “problematic plaza” was no more as the GM building is now the strong backdrop to the iconic Apple Store on 5th Avenue.

Only at the 5th Ave. Store

Without a doubt location is one of the prime draws for the 5th Avenue store in New York, nestled in among some of the leader companies in the world. This New York Apple Store, in the city that never sleeps, also lives up to that motto as the store is open 24 hours a day, 7 days a week, 365 days of the year. Even though a SoHo store arrived in New York prior to this one, it does not offer the same extensive hours of the 5th Avenue Apple Store that are perfect for tourists coming from all corners of the globe at all hours of the day. Due to the amazingly central location, consumers also have unprecedented access to major elite shopping areas and tourist attractions.

The 5th Avenue Apple Store might be open 24 hours a day all year long, but you won’t be going there for any significant training sessions. Unlike many other Apple Stores, this one does not have the theatre seating that allows for group technology training. Apple execs said they wanted to concentrate on the shopping and tourist atmosphere of the location and offer more space dedicated to that, rather than to training. You can still find the consumer-focused Genius Bar available, but just be prepared to make an appointment ahead of time.

Shoppers who dare to drive themselves to the 5th Avenue location can find paid parking under the nearby GM building at rates that fluctuate between the low $20s to the upper $40s per hour, depending upon specific areas and services such as valet parking. However, because of its location, there are multiple public transit options that will bring consumers very near to the Apple Store. At least 4 different subway lines come within a 6 block radius around the glass cube, and the yellow lines N, Q, and R are the closest.