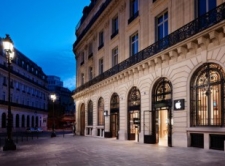 Departing from some of the typical architecture that is the hallmark of most of their stores, Apple took inspiration from the surrounding environment of Paris, France for its gorgeous “Opera Store”. The name derives from the famous Paris Opera House that is almost directly across from the location, and it quickly conjures up mental images of the most romantic city in the world.

History of the Opera Store

Before breaking ground for the Opera Store, Apple threw out the blueprints of every other Apple Store in the world and simply took inspiration from the surrounding neighbourhood of the 9th arrondissement. The store designers did not have to look far for ideas as the Palais Garnier is only 46 meters away, and has the beautiful architecture that one would expect from a building that first opened its doors in 1875.

Designers incorporated the historic look of the bank that originally stood in the space, and they were surprisingly able to capture the romantic setting of the neighbourhood. There is marble throughout with wrought-iron railings, polished stone, aged wood, and other features that make the transformed bank feel like an original business of the historic Paris neighbourhood. There are 2-story columns throughout the store that reach up to a vaulted ceiling, and skylights let in natural light throughout the day. Amongst the historical features of the Opera Store, designers were able to add one piece of architecture that most of the other Apple stores have – a spiral staircase. However in this case it was not built out of steel and glass, rather with wood and iron, so it seamlessly fits with the rest of the old-world features of the building.

Only at the Opera Store

The Apple Opera Store does not have notable features such as extended hours or private theatres, however it does bring a bit of modern technology into an otherwise old-world neighbourhood. Visitors to the store will find the famous Palais Garnier (Paris Opera House) just across the way, which has been home to numerous famous productions throughout the years, and many visitors from across the world visit Paris just to attend a performance here.

Tourists not only flock to the area to experience the world-renowned opera house, the neighbourhood is also known to offer many other forms of the arts. Visitors will experience architectural buildings that reflect centuries of life in Paris, as well as museums and historical centres. In addition to these beautiful destinations, there are also elite shopping options nearby that sell items from the world’s top designers. The Galeries Lafayette and Printemps are just two of the many popular shopping destinations in the area.

The Apple Opera Store reflects the neighbourhood both in style and in function. It has reduced hours of operation when compared to several of the other European Apple stores, and it is always closed on Sundays. With these limited opening hours it is very important that potential visitors make appointments with the Genius Bar to ensure that they are seen.

There are several metro stations nearby, including the Opera Station, and visitors can find lines to access the Opera region by using the RATP guides throughout the city. RATP stands for Regie Autonome des Transports Parisiens, and the subway lines are colour coded and further divided by numbers and/or letters.

Visitors who want the full Paris experience can opt to stay at one of the extravagant hotels that surround the Opera Store. The prices for accommodations in this area tend to be expensive as it is a highly desirable neighbourhood that is constantly targeted by tourists. A popular place to stay in the area is the W Paris – Opera, a hotel in a renovated 1870s Haussmann-era building that now sits between exclusive shopping boutiques. For those who are just coming into the city for the day, parking is very limited so it is recommended to arrive via the city’s transportation system to avoid unnecessary hassles.