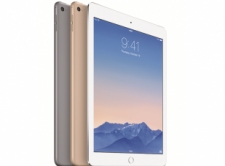 The iPad Air 2 was introduced to the public on October 16th, 2014 at an Apple event in Cupertino, CA. Apple CEO Tim Cook called it the “world’s thinnest tablet” at the launch, and even though the size was reduced, the capabilities were not. With updates in the user interface, a faster CPU, and Apple’s first real endeavor into the digital wallet arena, the iPad Air 2 is not just about a sleek, slender new look – but about showing other tablet developers that Apple is leading the world when it comes to innovation.

The iPad Air 2 brings Touch ID and has an anti-reflective screen with a fingerprint resistant oleophopic coating, making the user interface even sleeker than before. The improvements to the CPU and motion coprocessor further enhance the experience. The screen is LED back-lit and includes 3.1 million pixels, making the graphics pop on the screen.

Gamers were pretty excited about the updates to the iPad Air 2. The new A8X CPU, coupled with the 2nd Generation 64-bit architecture and 3 billion transistors means that there are significant improvements in regards to the performance of graphics.

The iSight camera was also a huge upgrade, moving to an 8 megapixel that now has burst mode. This means users can take several photos in a row without pausing. The rear camera has time-lapse, slow motion capabilities, and decent quality video recording. The FaceTime camera also has better face detection.

The iPad Air 2 includes a new M8 motion coprocessor, similar to the iPhone 6 and iPhone 6 Plus. This allows the device to track motion, calibrate sensors, and measure barometric capabilities. The A8X CPU and 2nd Generation 64-bit architecture offers speed, without reduced battery life. Apple, Inc. estimates that the Wi-Fi speeds are 2.8 times faster with the hardware updates.

One of the most anticipated improvements for the iPad Air 2 came to fruition when Apple announced it would come with Apple Pay, an electronic way to pay for things. However, without the NFC chip, Apple Pay is only able to purchase items through iTunes, iBooks, and the App Store. NFC, or “Near-Field Communication”, lets two devices exchange data when they are placed in close proximity of each other. Both devices must have the NFC chip and the hardware in order for the Apple Pay software to work. While retailers are beginning to use NFC hardware, only Apple’s latest iPhones carried the NFC chip at this time. Until all of the participating devices include the NFC chip, users will not be able to use Apple Pay for many retail purchases, like those at a local mall, for example.

Apple also introduced the iPad Air 2 with better Wi-Fi capability and connectivity. New technology included in the device allows for fast Wi-Fi connections, and the inclusion of Apple’s own SIM mean that users can switch at any time between carriers depending upon their needs without having to purchase new SIM cards. For example, before this update was made, users would have to purchase SIM cards that were unique to certain carriers to ensure consistent coverage. If the user was traveling and needed to switch carriers, he or she would have to have the particular SIM card of the other provider in order to have internet access.The Apple SIM now allows users to make those carrier changes without having to ever purchase a different SIM card. This makes the iPad Air 2 extremely desirable for those who travel frequently and usually would need to change service providers based on the region that they are in.

The iPad Air 2 is hands-down the fastest tablet computer released to date, and any online casino claiming to be the best for this Apple device will have to offer some pretty powerful software. We have performed lots of testing since the iPad Air 2 was released on October 20, 2014, and the MacCasino.net Team proudly recommends the online casinos below, broken down by geographic region.

There was only one online casino in the United States that was ready for the release of the revolutionary iPad Air 2, and that’s the Bovada Casino, who are the best choice for anyone in the USA looking to gamble on this Apple device. Bovada has spent years perfecting their proprietary casino software that never lags or disconnects, and they even offer unique casino games licensed through trusted partners. If you want a lightning-fast online casino that never slows down, whether you’re playing in Bangor, Maine, or San Diego, California, or anywhere in between, Bovada is the place for you.

For those living in the United Kingdom searching for an online casino to gamble on an iPad Air 2, the Bet365 Casino is definitely your best bet. They have spent years perfecting their mobile product and offer the most popular casino games, all of which run beautifully on iPad Air 2. Bet365 also offers a massive poker room and a full mobile sportsbook, both of which are offered alongside their fantastic casino software, so they truly are a U.K. gambler’s paradise.

We once again have to take our tuques off to the Bodog Casino, who are the best online casino in Canada, especially for those who want to bet on their iPad Air 2. Their mobile software is extremely popular for casino players from across the country, and they even offer a mobile sportsbook which allows betting on NHL games with only a few pushes of a button. If you want amazing graphics, fluid software, and super-fast casino games, Bodog is the only name you need to know.