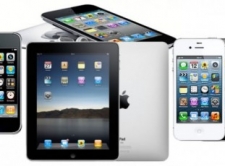 Since its inception in 1976, Apple Inc. has been releasing the highest quality machines that have educated and entertained millions of people worldwide. It is impossible to deny that the team of Steve Jobs and Steve Wozniak revolutionized home computing, as well as mobile technology and gadgetry in general. From the beginning of the 1980s Apple has released dozens of revolutionary products that have improved the lives of everyone who touched them. [+]

We here at MacCasino.net feel that the best of these Apple devices must be highlighted and reviewed so we all know just how far their technology has come.

The release of the iPhone in 2007 was Apple’s way of smashing their way into the mobile telephone market and telling the world that their company was about much more than home computers. The new software that powered the device called “iOS” blew customers away, and instantly created a loyal fan base that developed an insatiable appetite for all things Apple. It was this rabid fan base that transformed the product launches of each new iPhone into media spectacles by lining up at Apple Stores days before the release, in hopes to be one of the first people to get their hands on new models. In 2013 Apple loyalists went so far as to pay thousands of dollars for gold iPhones on eBay, even though they knew that the only difference from the other models was the color.

Steve Jobs first announced that he wanted to produce an easy to use, portable computer during a 1983 speech, and 27 years later Apple made good on that promise with the 1st generation iPad, and changed the face of personal computing forever. Traditionalists may argue that Jobs’ vision was first realized in 1993 with the release of the Newton MessagePad 100, however we refuse to count any version of the MessagePad as a “computer”.

Users immediately fell in love with the ease of the multi-touch screen and the size of the unit that was easily held in numerous positions. The software ensured that owners were dazzled by any piece of video that they watched on the tablet computer, and the iPad became an instant favorite for watching movies and television shows. Over time, the upgrades to the software made it the one “must have” device for users of all ages. This was due to the beautiful performance of the games, email, web browsing, and everything else that the revolutionary device could do – the iPad was an ultimate game changer.

Throughout the late 1990s and early 2000s digital music had proven that it was the wave of the future and was here to stay. Although many music listeners had resisted the movement at first and held onto their CDs, cassettes, and vinyl record albums, when the dust had settled the ease and size of digital music files was just too attractive to ignore, and MP3s pushed cassettes and CDs into extinction. Now that most people had home computers and knew what Napster was, digital music file sharing exploded and a new era of music format had arrived.

Steve Jobs and his crew could clearly see that people were going to need a fast, easy, and reliable device by which to manage their music collections. Apple launched iTunes in the beginning of 2001 and marketed it as the best way for music lovers to keep their albums and songs organized and accessible. Now all that was needed was a cool way to carry the songs around, just like the Sony Walkman had done for the cassette in the early 1980s. It didn’t take long after the launch of iTunes for Apple to release the iPod – the coolest way to store and transport digital music files that the world had ever seen. In the fall of 2007 Apple released the best iPod incarnation of all, the iPod Touch, and basically gave every user an amazing pocket-sized jukebox that could be taken anywhere.