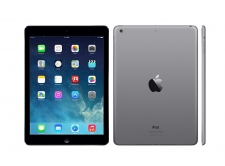 Apple first stepped into the tablet arena with the Apple iPad 1st Generation in April of 2010. Since then the devices have brought portability and capabilities that rival many desktop applications. Users searching for gaming, video viewing, web access, email, photo editors, and basic desktop publishing can find access through various iPad models.

The Apple iPad 1st Generation was released in April of 2010 and felt like a cousin to the iPhone in many ways. The device includes a familiar Apple Home button, a volume rocker, and a power/sleep control, as well as a screen rotation lock switch. This means that unlike with the iPhone, users can opt for the screen to lock in either landscape or portrait mode. Unlike the iPhone as well, the iPad screen is larger and therefore a preferred choice over the smartphone for things such as gaming and streaming videos.

The iPad 2nd Gen, or simple iPad 2, brought with it a few aesthetic and functional changes, such as a thinner feel and an ambient light sensor for easier e-book reading. The accelerometer and three-axis gyroscope give motion sensing games the most accurate experience up until this point in the iPad model line. The addition of iMovie also allows users to do video editing on the fly, and then upload and share videos, but it does not support Flash for HTML5. A popular app introduction came with the launch of the iPad 2 – GarageBand, and better cameras are favorites for those who like FaceTime.

iPad 3rd Gen Launched in March of 2012, the iPad 3 made an impression for the improved display, camera, and processor. These upgrades improve upon many different experiences for the user, from taking pictures and videos to faster web browsing on the go with the 3G model. The new Retina display makes the user interface even more enjoyable, and the higher qualities in the cameras give good results, especially for a tablet.

Features include:5 megapixel iSight camera, FaceTime camera up to 30 frames/second,Accelerometer and gyroscope, iTunes 10.6 or later

iPad 4th Gen The introduction of the iPad 4 was met with some criticism as it didn’t seem to have many improvements over the 3rd Gen model. Some of the updates include a new dock at the bottom of the screen for holding commonly used apps, and an improved camera for video chatting with 1.2 MP HD quality. The iPad 4th Gen includes an 8-pin Lightning dock which is up to 80% smaller than the previous 30-pin dock, and more durable as well.

The iPad Air name indicates a lot about this device. It is a lightweight tablet that is lighter and thinner, yet runs faster, than previous iPad models. The iPad Air includes Retina display with a 2048×1536 resolution, as well as Parallax, a feature that gives wallpaper a 3D effect when users move the device. The processing speed of the Air is fast, meaning that music and video fans are pleased with the performance.

The iPad Mini 1st Gen is perhaps most commonly compared to a Nintendo 3DS XL as far as size is concerned, and it seems to fit into the users’ hands in a similar way. However, it is much more than just a gaming system. It includes Siri and supports AirPlay, but the processing time on the device isn’t as high as other iPad models. As an update, the iPad Mini 1st Gen does include Lightning connectors and adequate camera capabilities.

The iPad Mini 2nd Gen feels a bit more like an iPad Air than just an improved iPad Mini 1st Gen. It includes the Retina display that was missing in the 1st Gen, along with a 5-finger swipe feature for accessing multi-tasking windows. The device lacks Touch ID technology, but includes an M7 motion coprocessor and A7 chip with 64-bit architecture. The camera are only slightly improved over those on the iPad Mini 1st Gen, but the device speed is fast enough to help run photography apps more easily.